The value of a college degree is crashing toward zero and may even be negative for today's COVID-graduates.

This is the stunning implication of recent research by the Federal Reserve into the precipitously falling financial returns of higher education.

You might be thinking — “but I thought the benefit of a college degree has been increasing all this time?”

You would be wrong, though understandably so.

Here’s a sketch of the basic argument:

Let’s walk through these points, one by one.

Point one represents the common (and, it should be said, true) belief that college graduates earn more than non-graduates. Another way of saying this is college education is correlated with higher income. We can compare the simple average (or median) earnings of college degree holders and non-holders. Lo and behold, one is higher than the other, therefore, correlation.

That’s really all there is to this point, so let’s get it out of the way first. I’ll drop this chart in here for good measure, which makes the point visually:

Unfortunately, this is where most mainstream analysis of higher education ends.

A degree is only one of many factors

I’ll spend some time on this point, as it’s the most important one to grasp.

To quote the authors of this same study:

The choice to attend and subsequently complete college is not random or arbitrary; it is instead related to numerous financial and non-financial considerations, among them parents’ wealth, intelligence, socio-cognitive skills, race, financial acumen, and parents’ education… Although terminal college graduates and postgraduates enjoy significant income and wealth advantages over non-grads, attributing these premiums solely to the effect of college would be a mistake. (Emphasis mine)

In general, people who choose to attend college have led different lives than those who don’t and will experience different lives after the fact, even if they make the same choice at this juncture. These pre-existing differences interact with the effect of college itself, leading to different outcomes.

College is not the “great leveler” it is often advertised as. Different inputs do not lead to the same output. GIGO, meet DIDO: different input, different output.

What are some examples of these different inputs? One is parent’s education and financial acumen. Individuals with college educated and financially savvy parents do better than those without and are also more likely to attend in the first place. This confounds any simple analysis of the benefit of a college education, as some of that benefit comes not from college itself but from one’s parents.

The authors of the previously cited analysis explore this idea and conclude:

Said more colorfully, rather than simply being a “leveler,” college is increasingly the vehicle through which the already advantaged express and compound their advantages. Mathematically, this accounts for some of the correlation I identified earlier, leaving less to be explained by true “causality” or, as the authors put it, “the true college premium.”

So how do we identify this “true” premium? There are multiple methods, but the most straightforward is to run a large regression of income on college attendance, controlling for all the appropriate variables that may correlate with college attendance or income. This is harder than it sounds, both because the choice of controls is subjective and because those variables might not be available to you.

So the author’s take a simpler approach, essentially controlling only for age. Surprisingly, that alone is enough to meaningfully reduce the supposed income benefit of college from 100% to only 50% for whites born in the 1980s:

First, notice that, contrary to popular belief, the premium has not grown over time and has in fact slightly decreased. It is not the case that college is increasingly important from an income generation standpoint.

Second, while 50% is still large number, remember that this only controlled for age. There are numerous other variables that aren’t being accounted for, like parental education or income, which we know affect future earnings. Adding these in would very likely reduce the income premium even further, but these data are hard to come by.

As the authors put it:

… these figures may exaggerate the true—that is, causal—college premium. Other variables, chief among them one’s parents’ education, may play a role in potential earnings and wealth accumulation… Those premiums may be upwardly biased estimates of the true income and wealth premiums. (Emphasis mine)

College is only getting more expensive

Point three like point one, is relatively uncontroversial. The real cost of college in the United States has increased meaningfully over time, as tuition growth continues to outpace overall inflation.

College is increasingly “priced to perfection.”

Again, in case there are any doubts, here’s some data showing the growth in the cost of college vs. broader prices in the economy since 1978. You don’t need a legend to know which line is which:

These surging costs are fueling an explosion of consumer debt. We can get some sense of this from the following table, which shows the median debt-to-income ratios among college degree holders across multiple birth decades at various years of age:

So for example, the median American born in the 1960s owed debt equal to 34% of their annual income at the age of 26, while Americans born in the 1980s owed debt of 109% of income, a tripling of the typical debt burden for young adults. While much of this relates to the broader availability of mortgage debt, at the age of 26, one has to assume that much of it comes college borrowings yet to be paid off. In fact, the authors note that “debt ratios generally are higher among college grads than non-grads.”

That debt levies a pernicious tax on the debt holder in the form of regular interest payments and often leaves them with negative net worth until the debt can be sufficiently paid down.

Add all that up and you arrive at the sobering conclusion that, college may no longer be beneficial from the standpoint of individual wealth generation. This doesn’t mean that it doesn’t have all sorts of other value (such as non-monetary or “social” value), but on this important dimension the returns seem to have fallen to zero or potentially even lower.

Unconvinced? Here is possibly the most important chart in higher education, showing the expected impact of a bachelor’s degree on the net worth of graduates born across various decades, again controlling for age:

What does this say? A white college graduate born in the 1930s could have expected to achieve 247% higher net worth than their non-college educated peers, while one born in the 1980s can only expect to own 42% more.

For black grads the story is even worse.

While the 1930s cohort (an extremely small group it should be noted) could be expected to own 509% more wealth compared to similarly aged blacks without a degree, those born in the 1980s only achieve 6% more wealth as a result of their degree, an effect “statistically indistinguishable from zero,” as the researchers put it.

This is a big deal.

The collapse in the financial value of a college degree can be traced directly to the explosive growth in the cost of attending college, financed by ever-growing debt burdens.

Notice that the chart ends at the 1980s birth cohort. If these trends have continued, recent graduates born in the 90s may do even worse relative to non-graduates, reflecting further erosion in the wealth effect of a college education.

If you’ve read this far, you should be disturbed and alarmed.

Why aren’t these sobering facts receiving more attention? It’s a good question —and I don’t have an answer — but I hope to at least point the public in the right direction by shining a light on the growing problem of ineffectual “degreeism.”

But there might be a counterintuitive “silver lining” to this situation.

College graduates do better in recessions than non-graduates. Their incomes do not fall as significantly, nor do their unemployment rates surge to the same extent, as we can see in data from the Great Recession:

In this sense, a college degree serves as downside protection or insurance against the worst outcomes. Thus, in tough times the relative value of a college degree increases. Given the way COVID disproportionately impacts low-wage workers, this is even truer right now.

Many of this year’s graduates are rightfully disappointed about their curtailed college experiences and graduating into a major recession. It’s important to remember though that, ironically, degrees are in fact more valuable during recessions.

There’s no such thing as a free lunch

College is not a free lunch. It’s the furthest thing from free, and its impact on individual wealth generation is dubious.

College is no longer a “sure thing.” We’re paying more for it and getting less. How much of this shift is being driven by colleges themselves vs. changes in the underlying economy is unclear, so we shouldn’t point fingers just yet.

What’s clear is that the calculus of college must change.

Many kudos to William Emmons, Ana Kent, and Lowell Ricketts, the authors of the study from which much of this post is derived. 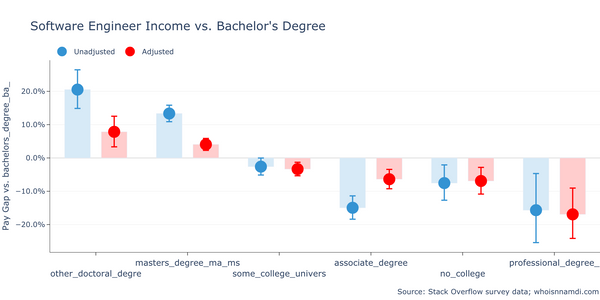 Do college-educated developers earn more? Yes, but less than you might think