Abundant capital is not a panacea for founders.

For the best companies, raising large war chests along with the branding effect that comes with them can serve as an "unfair advantage" against competitors, compounding gains and maintaining pole position.

This unfair advantage often comes through the hiring channel, which is high-octane leverage for fast-growing companies:

The “10x” in “10x engineer” conveys leverage just as the “3x” in “3x S&P” does. As an investor, leverage can multiply the returns you receive from a great investment thesis. And similarly, if you’re a founder with a great vision, your superstar employees will help you realize it faster and better – Talent as leverage

For most however, a frothy funding environment means more competition for talent. If everyone is raising tons of cheap capital and plowing those funds into hiring, your job as a founder hasn't necessarily gotten easier, since presumably you'll be working that much harder to recruit against every other startup doing the same.

The capital "bottleneck" hasn't disappeared – it's moved to another part of the production chain. Funding gets easier; hiring gets harder.

He deleted the tweet, but Mike Speiser once said:

The idea that hiring gets harder when funding gets easier (and vice versa) has two foundational components. The first one is easy, so let's get that out of the way first.

When companies are cash rich, they tend to spend more (*shocker*). Startups raise funding in large part to expand their teams. When the entire startup ecosystem simultaneously raises tons of capital, the additional money sloshing around inevitably shows up in the W2s of startup employees and the "voluntary churn" column of board of directors presentations. Recruiters spam the LinkedIn inboxes of every warm body in sight, and the hiring market heats up.

That's fairly intuitive. The second reason is much less so – discount rates.

Go back to the Mike Speiser quote. What does it mean for money to be "cheap?" Financial theory introduced us to the concept of the "discount rate" or equivalently the required rate of return or cost of capital. Money is "cheap" when discount rates are low, implying that investors and lenders require only a small rate of return on their investments in order to be satisfied.

Typically, low discount rates are associated with high valuations, since the present value of a series of cash flows rises as discount rates falls. Thus we get the frequent gyrations of the stock market, which summarize this dynamic in a single number:

The present value of talent

If you don't believe me, check out the following chart. It plots the unemployment rate over time along with the inverse of the detrended (i.e. accounting for the size of the U.S. economy) S&P 500 index (so down is up and vice versa). Notice the tight relationship between the two: 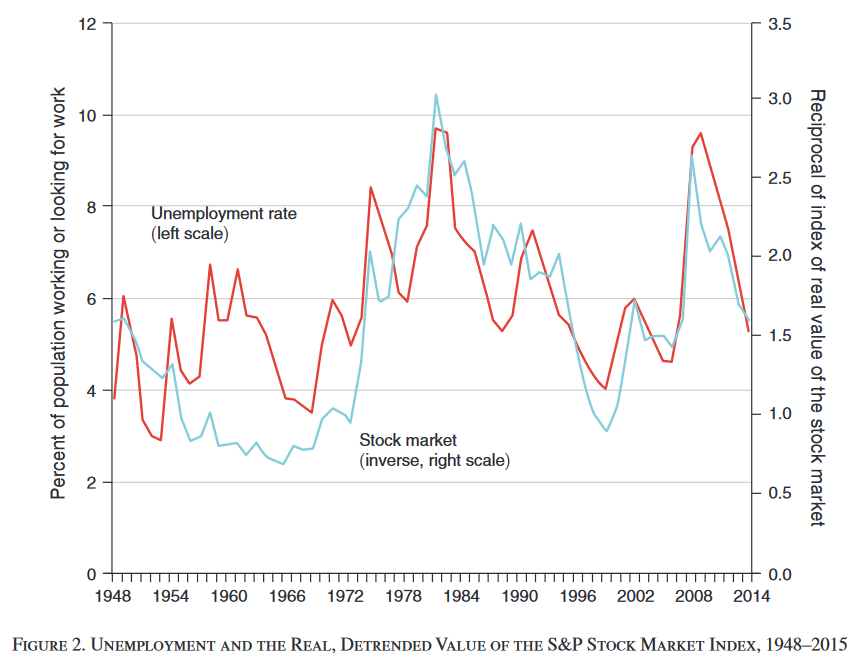 Figure 2 suggests that the stock market and unemployment respond to the same underlying forces, especially in the past few decades – High Discounts and High Unemployment

You might ascribe this correlation to general economic conditions rather than discount rates, but unemployment and output per worker don't actually track each other very well: 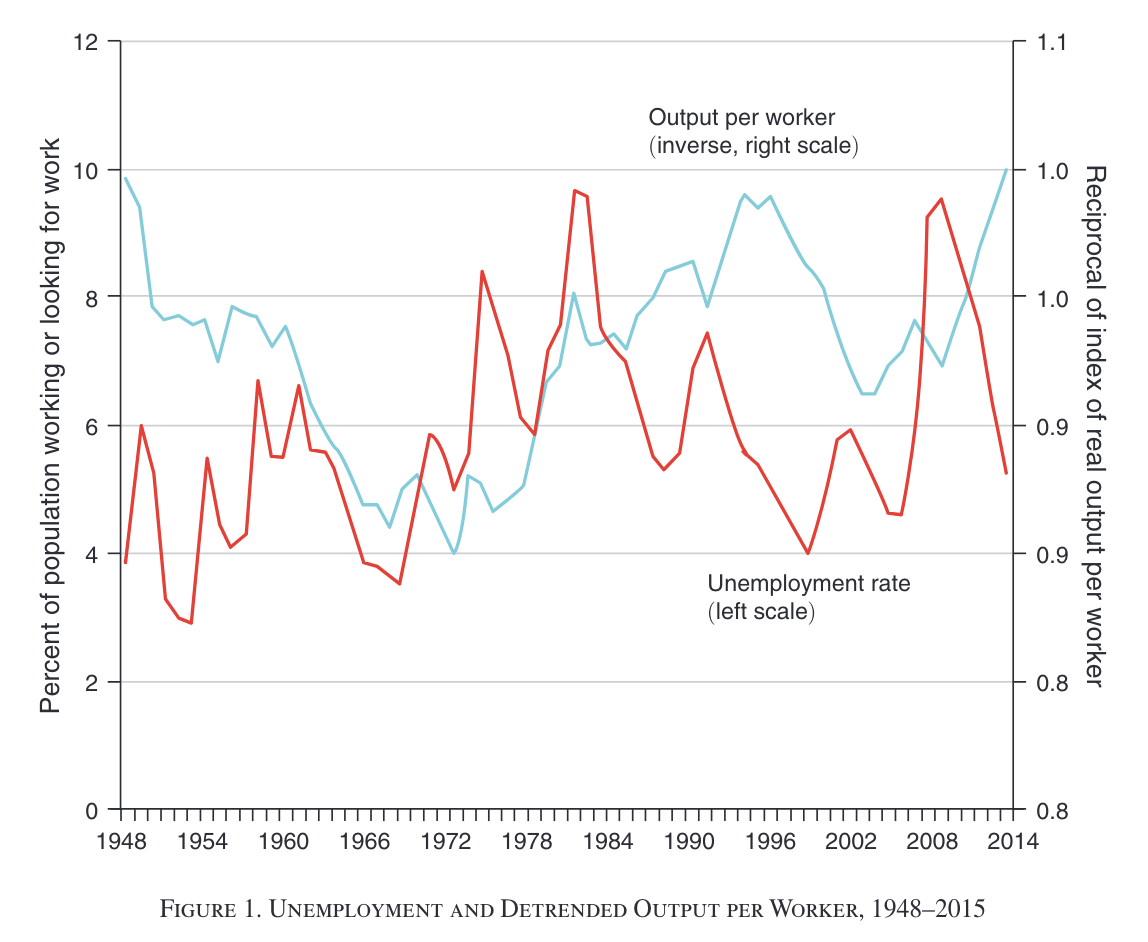 To see how discount rates apply to workers in the same way they do to financial assets, imagine the net value of a worker to a company being their productivity minus their cost, i.e. wage. This "job value" takes into account all future value the worker generates along with their cost of employment, in present value terms:

Job value tends to increase during booms, for two reasons:

Thus, the present value of productivity moves up and down by more than wages, driving job value up or down with the market cycle:

Naturally, the higher the "job value," the more eager employers are to hire workers. We get cutthroat competition among employers during good economic times and workers being dropped like hot potatoes during bad times. When the present value of hiring an additional worker is high, employers clamor to grow their ranks.

It's possible to use economic data to estimate job value across the entire U.S. economy. Job value and the stock market move together in lockstep: 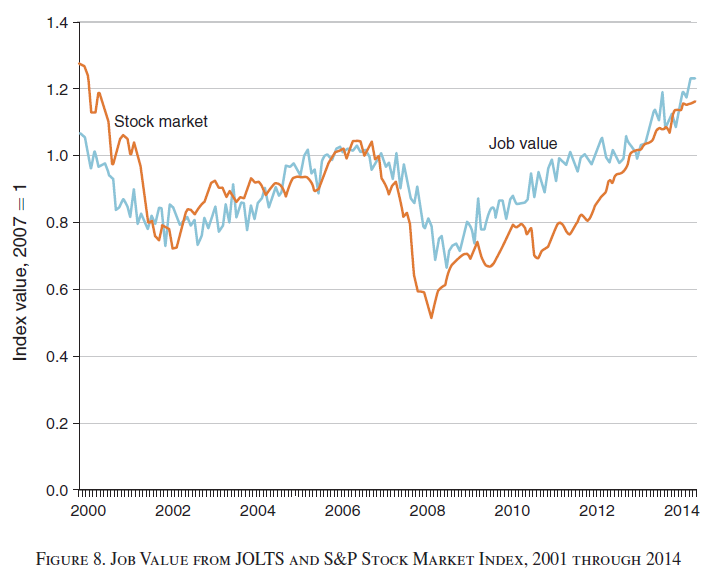 The similarity of the job value and the stock market value is remarkable. The figure strongly confirms the hypothesis that similar forces govern the market values of claims on jobs and claims on corporations – High Discounts and High Unemployment

The up and down movement of job value is incredibly consistent across industries too: 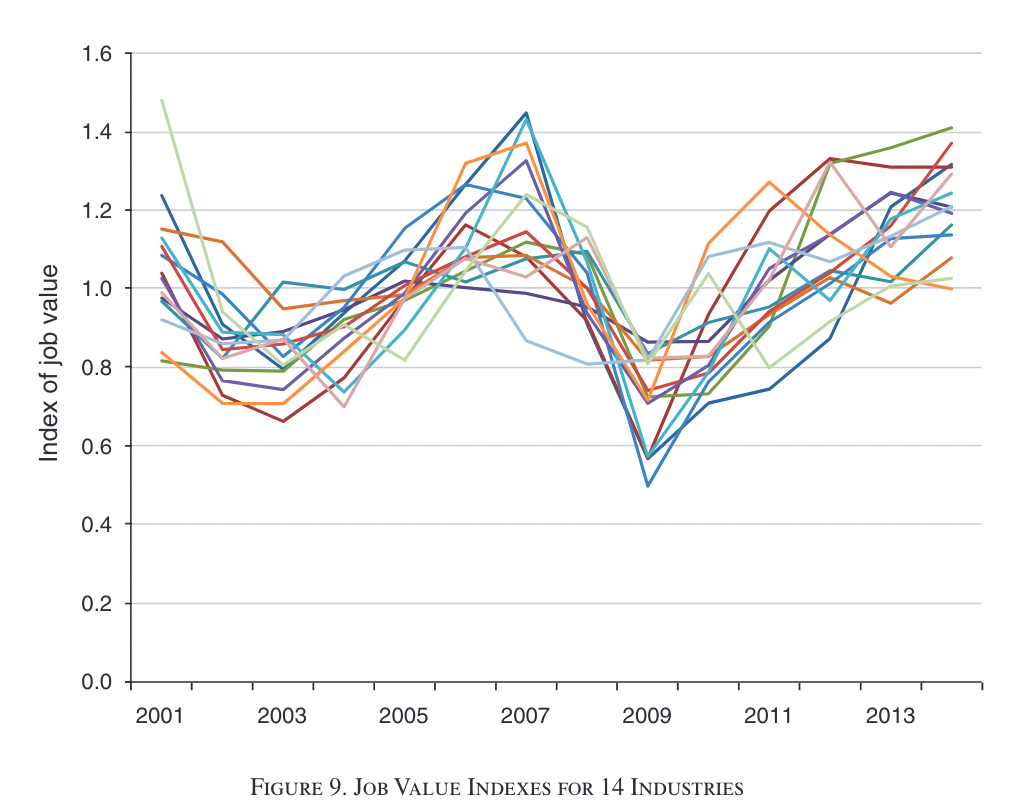 The strikingly similar responses in diverse industries strongly supports the hypothesis that an aggregate driving force dominates the movements of the job value at the industry level. This evidence points in the direction of aggregate forces such as rising discounts in recessions – High Discounts and High Unemployment

When interest rates are low, leverage becomes more attractive. Although the venture capital world likes to think of itself as distinct from debt-laden private equity land, in fact technology startups engage in all sorts of leverage, especially during boom times. I talked about one form of it, preferred equity, in a prior essay:

In this way, startups become synthetically levered. No debt appears on the balance sheet, yet the returns of the common equity (any really anyone below the most senior preferred stock) get juiced by the lower cost of capital achieved via preferred equity – Schrodinger's Balance Sheet: When Equity Becomes a Liability

I referred earlier to the notion that exceptional employees are a form of leverage. Just like financial leverage, talent leverage allows a company to do things they wouldn't otherwise be capable of with existing resources.

To attract such special individuals, startups have to promise the world to these ambitious folks, a sort of "debt." These superstar employees wouldn't join otherwise – the cash compensation alone is rarely worth it. They must be promised quickly-appreciating equity, as well as the Silicon Valley cache and prestige associated with a successful startup. This is related to Keith Rabois' idea of "talent arbitrage."

This Silicon Valley "spin" peaks during market highs – frothy periods where slick storytellers paint increasingly fantastical and implausible visions for what their company will achieve. It's a competition to see who can lever up their fragile enterprise the most.

If things start to go south, the bubble bursts, and these 10x employees are often the first to abandon ship:

The leverage you get from hiring really talented people is a huge risk during rough times, because these people have lots of other options and the ambition to pursue them.
…
If any of of the people in this chain stop believing the hype around which their project is organized, then the hype becomes unjustified… And once the bubble starts to wobble, 10x employees will move on to the next compelling tech vision, causing the leveraged death spiral mentioned in the last section. Leveraging your company with talent increases your volatility - either you orchestrate a revolution, or you implode – Talent as leverage

It's never pretty when leverage blows up, and talent leverage is no different. Troubled startups face double jeopardy – preferred equity implodes, as does the talent stack. 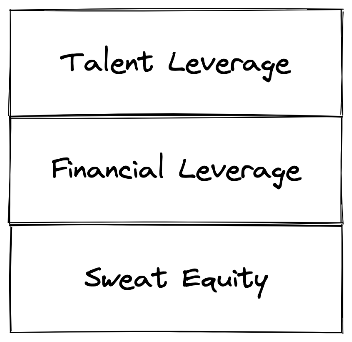 I'm increasingly skeptical of the notion that easy funding makes the lives of founders easier. Funding merely shifts the bottleneck.

In fact, hiring can be tougher after raising at a big valuation because candidates might think all the upside is gone already, making equity compensation less attractive:

At Retool, we decided to raise the smallest Series C we could, at a valuation substantially lower than most offers we received. Why? Because even though maximizing our valuation and money raised might be optically good (the press loves to report on large financing rounds at large valuations), it hurts the core constituency that got us here: our team… Reaching peak valuations too early results in substantially less upside for employees. – Raising less money at lower valuations

Between the increased effort that hiring requires during boom periods and the prospect of employee exodus after hitting choppy waters, founders should be wary of getting caught up in the irrational exuberance of the broader market. 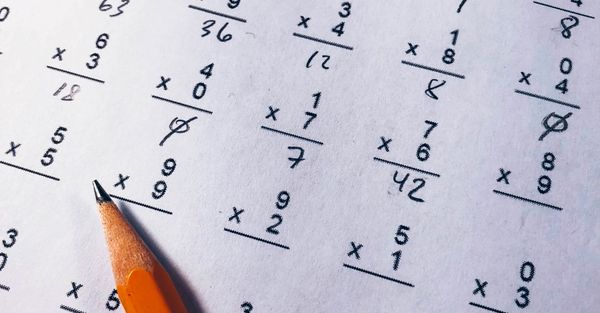 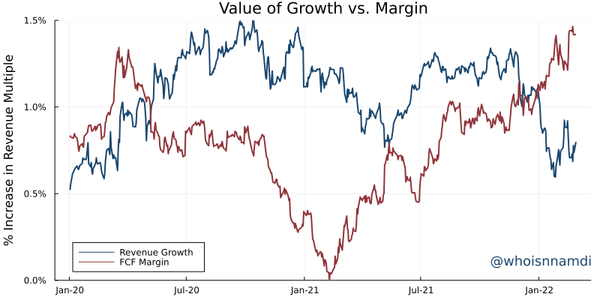 Rules are meant to be broken, and the Rule of 40 is no exception